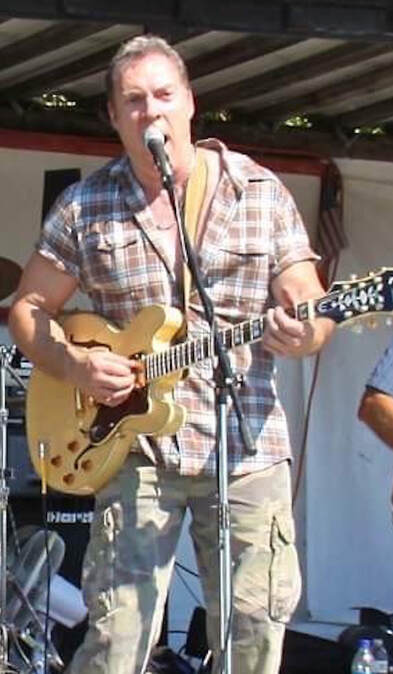 Hello all, thank you for visiting our site. I'm John Gitano, songwriter, and vocalist of THE AMERICAN RELICS.

Having had the very youthful experience of living through the late 1960s-early'70s, looking back and attempting to best describe it, from my perspective, from my point of view, it was in a sense in many ways akin to the words of one popular song by the group Steppenwolf from that era...'Magic Carpet Ride'.  Or maybe moreso, in a similar sense, more a propos, like an 'amusement park ride' (complete with bumps), that I and I'm sure the majority of others growing up in that period have not had a similarly comparative experience of another time period since . . . not even close.  I'm not saying it was better or worse, what I'm saying is that, to have been there . . . was a trip.

The word 'revolution' at that time, sexual, social, philosophical, etc., was conceptual in nature, pervasive, and ubiquitous, and by one definition not *ever to be taken literally . . . meaning taking over anything violently, or militarily.  That was not our agenda.  Our limitations of youth, and admittedly, confusion at times . . . well, would probably mean that we would not have been able to run the U.S. government successfully and smoothly at that time either, especially with the abundance of, and nature of the events that were continuously unfolding.

But we wanted change.  In all of the above, and more.  And we protested - the Vietnam War especially.  And there was racial strife, and social injustice, and unfortunately it made its way through generations to be still present today.  But from my perspective again, my environment, there was a difference back then.  We all, youth, bonded it seemed as one.  There was a comraderie.  Our adversary was 'them'.  Them, or they, were the older establishment, the ones who didn't want change, for their own agenda.  And from my perspective again, my environment, our protesting was always through peaceful means, non-violence.  Now I'm not naive, I know there was violence then, but believe me, the movement was widely known to be non-violent, and 'us against them'.  'Youth Against The Establishment'.  As a matter of fact, the slogan at the time was, as you probably know, 'don't trust anyone over thirty' (well, that might have been taking it a little too far . . . a lot too far).  Unfortunately now, there is much more of a division of thought, ethics, ideology, politics, amongst people even of similar backgrounds, age, and race, than I have ever personally witnessed before . . . again, not even close.  Extremely sad.

Getting back to that time, that era.  There was a 'feeling in the air' then.  You can't pinpoint exactly what it was, or why, it just was.  It was different.  And that feeling, along with having other benefits, was so conducive to songwriting in particular.  Everyone I knew was writing songs.  We had *great musical influences, less economic pressure (I was renting an apartment in a building one block from the main entrance of my college for $175/month), less cultural pressure, less sexual concern (I don't want to get into that here), less 'social media and technology pressure', or non-existent 'social media and technology pressure' ("You're not on Twitter?!  You don't have a MacPro iPad version 1,000,002?!", etc.) which all helped clear our young minds and leave room for creativity.  There were other ways to assist our creativity also (wink).  The youth today, it seems, and I may be wrong, are exposed to a lot more pressure, past and future, than I was.  And musically, in particular, it might sometimes result in a lack of clarity necessary to create music at one's best.  I don't know, I can't speak for an entire generation, I may be wrong.

What advice I can give though (if anyone cares) pertaining to this . . . is this.  As a songwriter, whatever you are listening to, especially from any past era, any musical genre, recognize and capture the 'feeling of the time' in the recording, as a benefit and influence in your own songwriting.  Take the best of the past and incorporate something new, something of your own.  That's what I try to do.  So I close my eyes and go back to that time.  In my case it's usually the late '60s-early'70s, to also 'capture the feeling', to remember how I felt just walking down the street, or playing in my first band, or being with a girlfriend.  If I wanted to best express today how I could share my experience of those times, it would still always be through music.  So 'feel the feeling' and capture it.
​
Well now that I might have bored you with too long an introductory description of that era, or have sounded a bit too preachy, let me next tell you the theme of THE AMERICAN RELICS.  We are an ensemble of musicians that have come together to share in the experience of particular related musical concepts, which are; playing music with great influences of melody, analog-sounding recording production, harmony, and other influences from specifically the 1960s-'70s era, as well as other eras also.  Each person has their own projects, but when the time arrives for THE AMERICAN RELICS to perform, we have the musicians ready.  The following bios are just some of the musicians that have contributed to past, present, and future to-be-released recordings.  Not all past contributors will be mentioned in the available space on the site here, but shown on subsequent pages are a few bios of some of those who I've come to know as very interesting people, excellent musicians, and friends.

Oh . . . before I forget, what I think is a nice, true, 'short' story.
So . . . I was fortunate enough through a stroke of luck, the internet, and connections, to communicate with one of my personal music idols, Jack Bruce, songwriter, bass player, and vocalist of the '60s group CREAM, not long before his passing . . .  God rest his soul.  I was to get to meet him, pre-arranged at, of all places, an outdoor band shell performance venue when he was performing with Mark Farner from GRAND FUNK RAILROAD, and other 'legacy' musicians, across from the NY Aquarium in Coney Island, Brooklyn.  There, I succeeded in speaking to him - at length! - miraculously, after the show backstage, where I thought there would probably be 100 other people looking to speak to him also.  There wasn't . . . or they just didn't attempt to.  He then graciously answered so many questions I'd had for thirty-plus years about CREAM specifically.

I then asked him to do me a favor.  If I dial my sister, who wasn't at the concert (I don't remember why), would he joke with her on the phone about not being there, and say that he was disappointed in her.  I dialed my sister and said "Nanette, Jack Bruce wants to speak to you on the phone", and handed my phone to him.  Now realize, my sister is just as big a fan of CREAM as I am.  He takes the phone and says to her, "Nanette, where are you?  We've both been waiting, get down here!  Come on, John said you'd be here, what happened?  I'm very disappointed", all said in a thick Scottish accent.  At that point, I gather that my sister is saying something to him, because he's silent, and I see his face change.  I take the phone, and with a puzzled, and a bit of a seemingly-concerned look on his face, he then tells me that she said to him, "John, get off the phone with that phony English accent.  I'm busy, and have more important things to do right now than play some stupid game with you!"  And she hangs up on him.  He then says to me, "John . . . do I have a phony English accent?"😟 (again, he's Scottish, definitely a difference).  "No . . .  really."  he adds.  So I'm amazed that I'm standing there with one of my true musical idols who just asked me a question that, in response, I don't know whether to burst out laughing, or if he really meant the question posed to me because he took seriously what my sister had said, and it affected him.  So I just stood there staring at him like a dummy for way too long, because I couldn't think of what to say . . .  Dumb.

Of course, my sister calls me a half an hour later, after I had left, and says, "Not for nothin' (a favorite expression of hers), that wasn't really Jack Bruce on the phone?!" (probably realizing that he had a concert in the area, for some reason she couldn't go, and then correctly putting the two and two together).  I simply said "You know it was."  She responds, "WHY DIDN'T YOU TELL ME?!!"  "I did" I said.  And then she says, "No, why didn't you REALLY, REALLY tell me?!" 😩

That story is dear to me, because my sister Nanette has since passed also.  In addition, I thought CREAM fans would appreciate it too.  I hope you enjoy listening to our music (Relics Music page), and see you all someday, hopefully soon, at a concert of THE AMERICAN RELICS...(March 17, 2021).